How does the ‘School of Rock’ musical cast the kids? 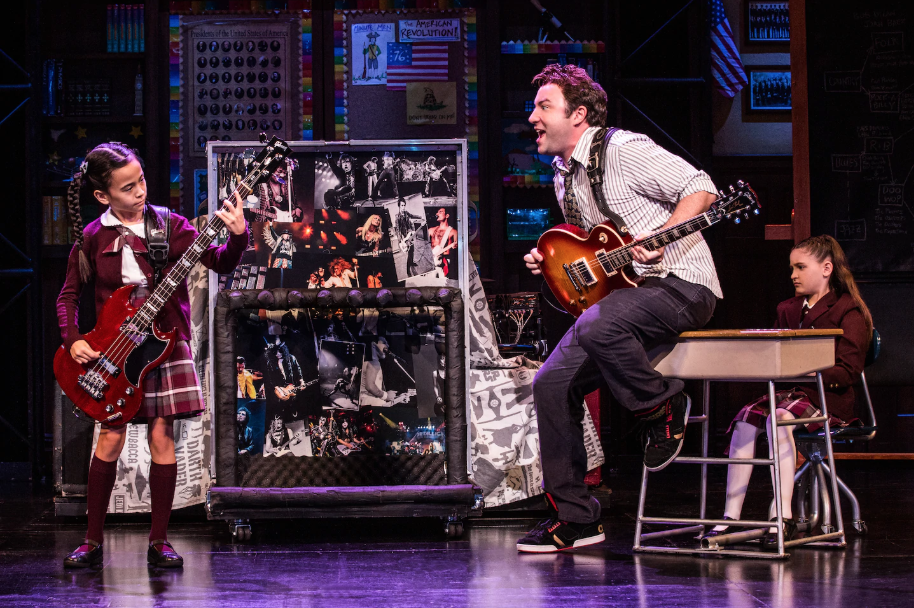 Andrew Lloyd Webber’s stage version of “School of Rock” calls for kids who can play instruments. But how good can a 9-year-old really be?

“You’d be surprised,” says casting director Claire Burke, who has been with the musical since before it hit Broadway in 2015. “Usually at 8 or 9, they have only played for a couple years, obviously. But there are some 10-year-olds who can really shred on guitar. I guess some people just have that innate talent.”

The musical is an adaptation of the 2003 movie with Jack Black as an obnoxious die-hard rocker named Dewey who takes on substitute teaching to make ends meet. Through the alchemy of rock-and-roll, Dewey bonds with his fifth-graders — and, of course, forms a band with the students.

When the touring company arrives at the National Theatre for two weeks starting Wednesday, the kids in the cast will range from ages 9 to 12. The four main young characters are a classic rock combo — guitar, keys, bass and drums. That casting challenge, Burke says, “is what makes the show unique. It’s not just that they just sing and dance. They need to be incredible instrumentalists.”

It’s an unusual niche that Burke says is “very fun, but it’s a lot more work than your typical Broadway show. There is a lot more research you need to do. You can’t just call agents to send people in. Often these are kids who never thought about acting before, so we look into music schools and music camps.”

Whether the movie took its idea from the schools created by Paul Green was a bone of contention when the picture came out, but that issue has cooled; the show has partnered with actual School of Rock branches to help get the word out about auditions. There are several Washington-area locations, including the Ashburn, Vienna and Silver Spring schools owned by Laura Bollettino. That cluster will offer a student concert Jan. 19 at the Fillmore in Silver Spring.

“Kids don’t know what they don’t know,” Bollettino said, meaning many are too young and curious to be intimidated. “They’ll push themselves.”

A School of Rock is how current cast member Leanne Parks got involved: Parks started piano at 5, and then two years ago signed up at a School of Rock near her family’s home in Long Island, only to find the place awash in girls like her: wanting to sing and play piano. Her dad noticed that bass players were scarce, so Leanne took it up.

“I never wanted to put it down,” Leanne, now 11, says by phone from the show’s tour stop in Toronto. Very quickly, she felt, “this is my calling. I’m very comfortable now putting my fingers on it. I like how it’s the glue of the band, with the beat of the drums.”

The guitarist has typically been the hardest part to cast. “Zach does a lot of shredding and showing off,” Burke says, referring to the character’s name in the show. And bass players are getting easier to find.

“It seems like a million girls have taken up electric bass,” says Burke, 30, who was a casting assistant when she latched onto the show in 2014. “A lot of them know it will benefit them for ‘School of Rock.’ And there are kids who see the show and get interested in picking up an instrument.”

Even when Burke unearths kids with a knack for playing, and whose families are ready to have a parent or chaperone commit to several months on the road (where tutors and online assignments help young cast members keep up with school), they may not be ready to sing or act. One youngster up for a role with the original New York cast was exciting to the producing team, for example, but was woefully bashful about singing. Loosening up with “Happy Birthday” is one of the low-key tricks designed to help put auditioners at ease.

“He was an amazing actor, amazing at his instrument — and he just would not sing,” Burke recalls. “That was a case that took a lot of cajoling. Everyone was rooting for him, and he ended up being great. I think it was just having enough of us saying, ‘We love you. We want you in the show. We just need you to show us you can sing.’ ”

“In the beginning I was kind of scared, because I had never taken acting lessons,” Leanne says. “I was nervous because other people had been doing other tours. But this is kind of like family. It was nice. They have the same passions as me.”

Performers can rapidly age out of their roles if they grow fast or if their voices change. On the other hand, they can also age in: Burke sees hopefuls who aren’t quite ready at 8 or 9 but who come back and get cast after another year or two of work. Unsurprisingly, some auditioners just aren’t ready.

“Generally when a kid comes in and hasn’t memorized all the material or prepared, that’s a good indication that maybe he’s not that interested,” Burke says. “And that maybe the parents are behind it.”

Lloyd Webber’s rock score isn’t as complex as his early experimental rock concert “Jesus Christ Superstar,” yet its fancy flourishes range from vintage rock riffs to a serious helping of Mozart. It’s challenging enough that Burke calls it “a very hard sing for the adults.” But Leanne sounds undaunted.

“It’s not hard,” the Metallica fan says. “I just listen to it a lot, and I practice my bass with the music. And even when I’m not onstage, I try to listen to other people onstage, because that will help me in the future — how they breathe when they’re singing, and how they accent their lines. You have to practice a lot. But in the end, it’s awesome.”