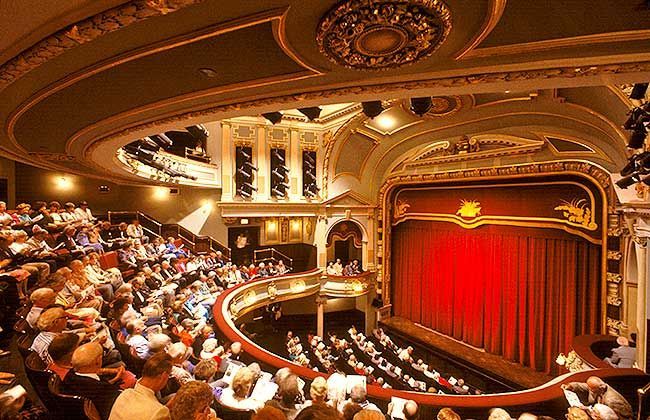 Asolo Repertory Theatre, Florida’s premier professional theatre, is one of the most important cultural forces in the Southeastern United States. A center for theatrical excellence, Asolo Rep stages up to fifteen productions every season, spanning a diverse repertoire of newly commissioned plays, bold reinterpretations of contemporary and classical works, and provocative new musical theatre experiences.

Asolo Rep is a major force in Sarasota’s rich arts scene, whose quality and depth rivals some of the largest urban centers in the country. Asolo Rep is annually the creative home of more than 100 artists, technical craftsmen, and administrative staff. Its talented and accomplished resident acting company is complemented by top-flight, award-winning directors, designers, and guest artists who come to Sarasota from around the country and around the world.

Under the dynamic leadership of Producing Artistic Director Michael Donald Edwards and Managing Director Linda DiGabriele, over 100,000 patrons are drawn each year to the theatre’s rotating repertory season. In its role as the largest professional not-for-profit theatre in the U.S. south of Atlanta, Asolo Rep serves as a springboard for successful productions to travel to Broadway and other regional theatres throughout the country.

Asolo Rep is also proud to have an ongoing partnership with the FSU/Asolo Conservatory for Actor Training, ranked among the top ten actor training programs in the country. Conservatory students undergo a rigorous three-year Master of Fine Arts program, culminating with the third-year students’ inclusion as part of Asolo Rep’s mainstage company. This unique collaboration has proven to be a successful formula for producing the highest quality professional theatre while providing first-rate training for America’s next generation of actors.

Whether staging a new work or re-envisioning a classic, Asolo Rep creates theatre that consistently surprises, entertains, challenges and inspires its audiences by inviting them to take part in shared acts of imagination. With its ambitious theatrical offerings and ground-breaking education, outreach and audience development programming, Asolo Rep is more vibrant and its work more relevant than ever before. A theatre district in and of itself, Asolo Rep exists to present a diverse mix of theatrical work of the highest artistic standards and enthusiastically engage its audiences, continually ensuring its lasting legacy for future generations.